Sedna: Inuit Goddess of the Sea

The sculpture atrium at PAMA includes work by Inuit carvers. These works were assembled to represent the legend of Sedna, the Inuit Sea Goddess.

Sedna is an important figure who features prominently in Inuit oral legends that are passed down from one generation to the next. Half human, half fish, she rules the underworld and over all marine life. Sedna is often identified by her tail and long tresses where she is said to keep sea animals like seals, walruses and whales. She only releases them when she is appeased by human offerings or by the visit of a shaman who calmingly combs her hair. Hunters seeking to feed their family depend on Sedna’s good will for she controls the supply of animal life as food.

Inuit legends include the animals of the Arctic land, the very animals that the Inuit people rely on for sustenance, clothing and transportations. Humans and animals often merge as creatures and become characters in stories that help explain the creation of the world, its mysteries and the life lessons that every Inuit must learn. 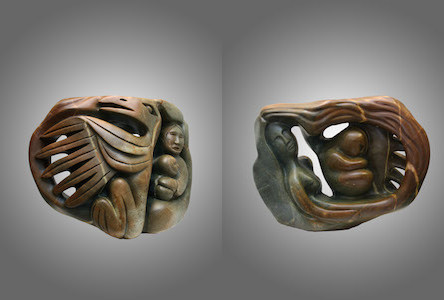